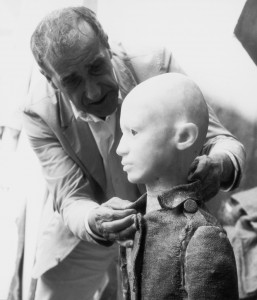 Tadeusz Kantor (1915 Wielopole Skrzyńskie – 1990 Kraków). An avant-garde artist, painter, draughtsman, art theoretician, stage designer and director, author of happenings, a prominent 20th-century theatre reformer, one of the most renowned artists on the Polish art scene. Between 1934 and 1939, he studied at the Academy of Fine Arts in Kraków. During the German occupation he founded the experimental Underground Independent Theatre, where he staged clandestine productions of Juliusz Słowacki’s Balladyna (1943) and Stanisław Wyspiański’s The Return of Odysseus (1944). Instrumental in forming the Young Artists’ Group, a hub for Kraków’s avant-gardists. In 1948, he co-organised the 1st Exhibition of Modern Art in Kraków, where he exhibited his metaphorical paintings. From the mid-1940s to the mid-70s, he designed sets and costumes for professional theatres. In the period 1950 – 1954, in protest against the socrealist doctrine, Kantor withdrew from the official art circuit. In 1955, drawing on the tradition of the pre-war Cricot the Artists’ Theatre, together with Maria Jarema and Kazimierz Mikulski, he founded the Cricot 2 Theatre. In 1957, with a group of artists, he re-activated the Kraków Group. As part of the Cricot 2 Theatre, where he based performances on plays by Stanisław Ignacy Witkiewicz and later on his own texts, he created a theatre laboratory, progressing from the Autonomous Theatre (The Cuttlefish, 1956), through the Informel Theatre (The Country House, 1961) to the Zero Theatre (The Madman and the Nun, 1963), the Happening Theatre (The Water Hen, 1967) and the Impossible Theatre (Lovelies and Dowdies, 1973), culminating in the Theatre of Death (1975). Kantor’s painting was inspired by the contemporary art that he came into contact with during his numerous sojourns abroad, in particular in Paris and New York; thus, his paintings experimented with informel, Dadaism and conceptual art.

In the early 1960s, Kantor gave up on depicting reality in any form and concentrated on his new concept: emballages (wrapping). Starting in 1965, he embarked on a series of artistic actions and happenings (such as The Anatomy Lesson after Rembrandt, 1968), working closely with the Foksal Gallery in Warsaw. In 1975, he published the manifesto of his Theatre of Death; its corollary was his world-acclaimed production The Dead Class. During the 1980s, the Cricot 2 Theatre staged such well-known productions as Wielopole, Wielopole (1980), Let the Artists Die (1985) and I Shall Never Return (1988). At that time, another watershed in his art took place, Kantor’s return to figurative painting. In the last years of his life, he created a series of paintings with the poignant title Further On, Nothing, in which he took stock of his life and his art. In 1990 Kantor produced his ultimate performance Today Is My Birthday but did not live to see it on stage. The production was staged by the Cricot 2 Theatre posthumously.