Christian Boltanski. In the Blink of an Eye 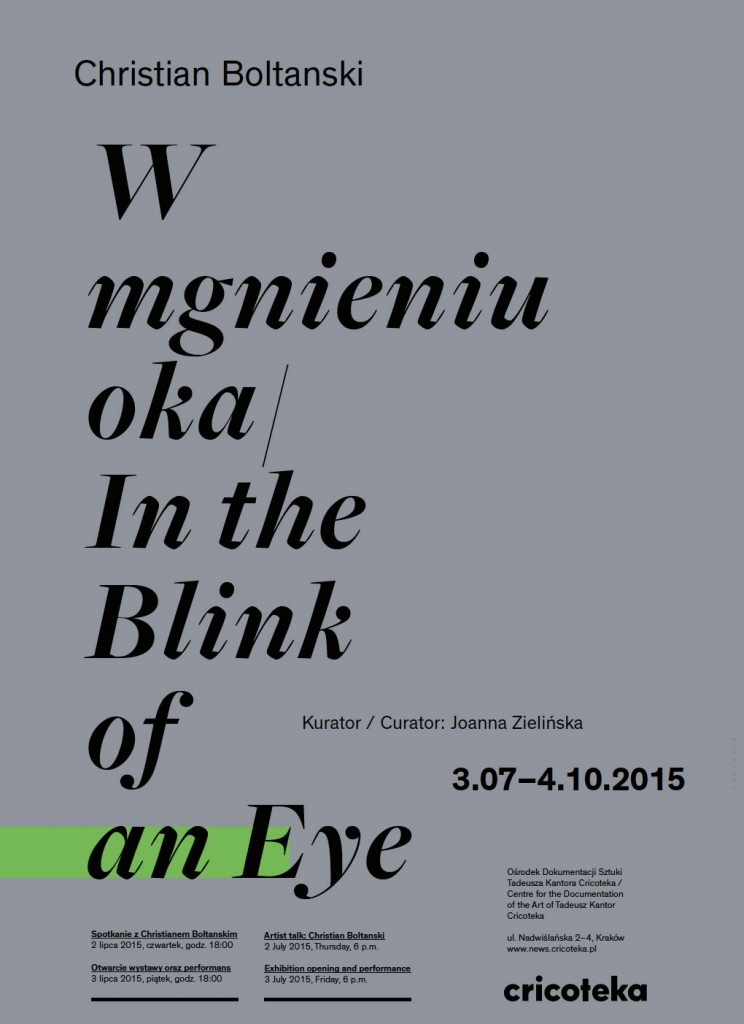 Christian Boltanski was born in Paris in 1944. He creates films and installations. He started to paint as a teenager and has never attended art school or college. The main medium that he employs is photography. His trademarks are biscuit boxes arranged to resemble unusual archives and monumental works created with clothes. Light and sound play an important role in his works.

Found photographs, piles of clothes and recordings of the beating heart (Heart Archive) as well as compilations of objects belonging to various people (the series Inventory) represent an absence of the protagonists while simultaneously celebrating individual micro-stories, the focus of Boltanski’s particular attention. The artist works with collective memory, often related to historic events, including the Shoah. He is interested in destruction and the annihilation of matter, which is why he employs vulnerable materials such as photographic paper.

Boltanski’s early art was focused on his childhood and on creating his own, private mythology. One of the early works involved the recreation in clay of objects that he remembered from his childhood. The art of Tadeusz Kantor had a seminal impact on Boltanski. Both artists share a fascination with the theme of vanitas and the use of objets trouvés to create a story.

In response to Cricoteka’s request, Boltanski will create a site–specific installation that will involve laying grass and cut flowers over the gallery’s floor. The work will be an emotional monument, subjected to the natural process of decay, governed by the diurnal rhythm and responding to the changing time of day and weather. The artist will explore the architectural scope of the Cricoteka building, revealing its glass walls.

Christian Boltanski was born in France in 1944 and lives in Paris. He had no artistic edu-cation; he started to paint in 1958. He first came to the attention of critics in 1968, with a screening of some short films and the publication of his sketch books. Both the films and the sketch books explored his profound reflections on human existence, which were to become the leitmotif of his art. In the 1970s, Boltanski began to experiment with clay, sugar and gauze. He also embarked on photography, a medium that he employs in a similar manner to painting. He made collages, combining elements of still life with vignettes of everyday trivia. The works represented collective perceptions of contemporary civilisation. He went on to use ready–mades and small, colourful figurines cut out of cardboard, subsequently photographed to create large format images resulting in theatrical compositions. He also made kinetic installations. In his work The Shadows (1984), he lit figurative forms with strong light, the resulting forms creating a mystical landscape. He ventured into light installations, based on historic photographs, to reconstruct events from the past. In the exhibition Personnes during Monumenta (Grand Palais, Paris) in 2010, he filled the space with piles of clothes. In his works, objects tell the story of human suffering. His large-scale installation Chance was presented at French Pavilion during 54th International Art Exhibition – La Biennale di Venezia in 2011. The installation was chance, luck and misfortune. Christian Boltanski has participated in more than 150 exhibitions all over the world. Several times, he presented his works in Poland at Foksal Gallery in Warsaw and Centre for Contemporary Art Ujazdowski Castle in Warsaw among others.