JAREMIANKA. I’m staying in this theatre. I like it here

Maria Jarema, Jaremianka (1908–1958) received her first painting supplies from Zygmunt Waliszewski at the age of 10. Her brother, Józef Jarema, taught her how to paint. Despite the expectations of her friends and family, she chose sculpture: in 1929, she began her studies in Xawery Dunikowski’s studio at the Academy of Fine Arts in Krakow. She initiated the founding of the 1st Krakow Group, created in the early 1930s by left-wing artists who believed that an artistic revolution would bring about social change. A free human being, uninhibited by censorship, was to be at the centre of this transformation. 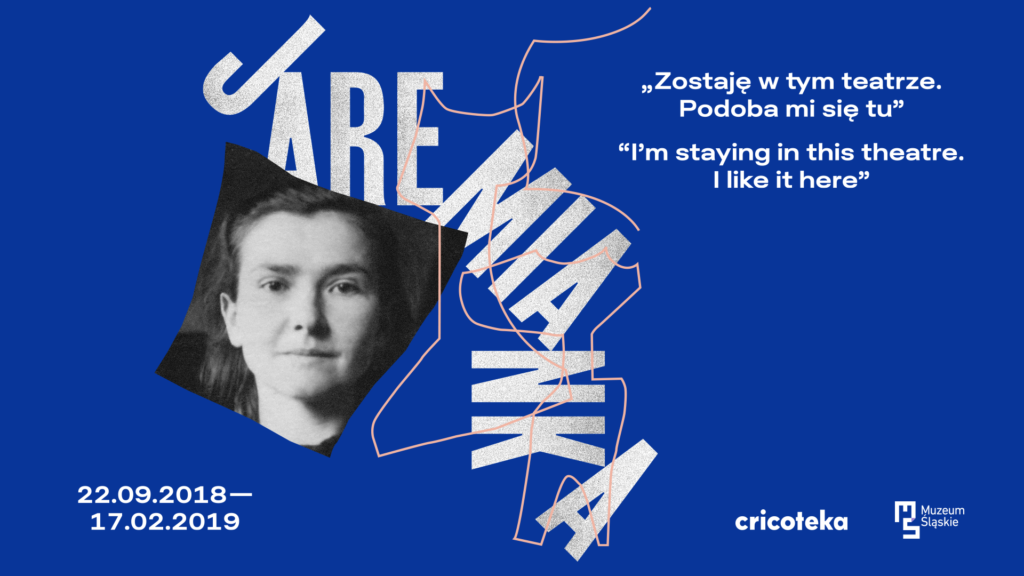 Before the war, Jaremianka collaborated with the experimental Cricot Theatre, and created political satirical shows with Adam Polewka and Jonasz Stern. She was the author of several theatre set designs, created costumes and masks, and sometimes appeared on the stage. Among other roles, she played Wanda and the Letter “K” in the Tam-Tam show, and the Modern Woman in Zielone Lata [The Green Years], a play written by Józef Jarema with her in mind. During the war, she worked as a cloakroom assistant at Dom Plastyków [Artists’ House] and designed toys in puppetry workshops. Due to difficult living conditions, she abandoned sculpture and painted mainly gouaches and watercolours for sale. After the war, she turned towards abstraction. With time, she began to experiment not only with form, but also with material: she established her own technique, a combination of monotype and tempera.

Together with Tadeusz Kantor and Kazimierz Mikulski, she founded the Cricot 2 Theatre and was involved in the reactivation of the Krakow Group. In cooperation with the Robotniczy Dom Kultury [Workers’ Cultural Centre], she produced Pablo Neruda’s Niech się zbudzi drwal [Let the Lumberjack Wake Up] (1949), designed costumes for Stanisław Ignacy Witkiewicz’s Mątwa [The Cuttlefish] (1956) and Kazimierz Mikulski’s Cyrk [Circus] (1957). In 1958, she represented Poland at the 29th Venice Biennale. Later that year, she received the Francesco Nullo Associazione Italo-Polacca [Italian-Polish Association] award for works presented there.

The exhibition Jaremianka. ‘I will stay in this theatre. I like it here’, is an attempt to look at Maria Jarema’s work from the perspective of her theatrical achievements — through an analysis of such stage elements as space, body, movement, form, light and colour — as well as a proposal to read the artist’s various incarnations scattered among artworks, literature, theatre, “urban legends”, and anecdotes. The exhibition revolves around contexts that do not create a monographic exhibition, but rather form a multi-perspective mosaic, just as Jaremianka’s art does. Besides, they can be interpreted as a heterogeneous process of building tensions, breaking down and reassembling figures, and consolidating forms.

The exhibition, opened on the 60th anniversary of the artist’s death and the 110th anniversary of her birth, focuses on Jaremianka’s post-war work that spoke the language of abstraction — in order to consciously depart from this language, one must study it first.