The collaborative work of Belgian artists Harald Thys and Jos de Gruyter is rooted in a folksy, tragicomic sensibility honed into an experimental dramaturgy. Their video and photographic work uses simple, symbolic sets, including the paradigmatic spaces of home, battlefield, urban periphery and community hall. They have engaged a recurring cast of non-professional actors as well as invented or adopted personae spanning the forms of puppets, dummies, plush animals, makeshift robots and rejected toys. These characters continually rehearse power dynamics and emotional entanglements, creating worlds not unlike our own, yet more focused, bizarre and bleak. The artists seek ways to confront marginal, incapacitated, lost and alienated subjects without defining these ‘others’ in sociological terms. In this sense, and especially in their novel use of ghoulish humour, Thys and de Gruyter broaden the scope of reflection on socially produced behaviour. 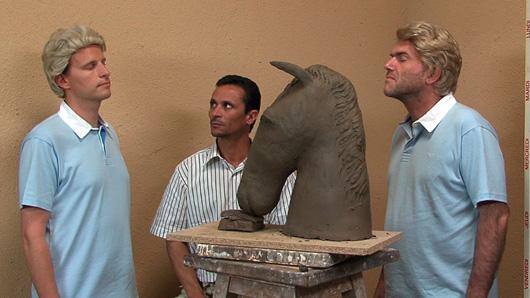 Harald Thys (b.1966) and Jos de Gruyter (b. 1965) live and work in Brussels and have been working together since the mid-1980s. Their work has been widely exhibited, including solo exhibitions at Le Plateau Paris, Artspeak Vancouver, Kunsthalle Basel, Culturgest Lisbon, Kestnergesellschaft Hanover, Muzee Oostende. Their work has also been included in exhibitions such as the Irish Museum of Modern Art, the Berlin Biennale, Manifesta Trento, The Power Plant, Toronto, and the IAC Villeurbanne, among many others.