Nathaniel Mellors operates at the interface of different disciplines. He is interested in the fragmentation of language, in memory, the grotesque, the Theatre of the Absurd and animatronics. In the musical performance he has prepared for Cricoteka, he explores his interest in contemporary music. His work contains many threads in common with the theatrical quest of Tadeusz Kantor. Mellors’ sculpture 7 Ages of Britain Teaser Face, presented in Tadeusz Kantor’s Studio, is one of a series of ‘performative heads’ shown, amongst other venues, at the 2011 Venice Biennale. Its prototype could be seen in the film 7 Ages of Britain Teaser Face. In making it, the artist employed technology used in large-scale film making. The naturalistic appearance of the object evokes negative emotions. This reaction bears out the Uncanny Valley Theory – evolved in the 1970s by Japanese robotics experts  –  who posited that the more human android objects appear to be, the more they stimulate a response of fear, horror or revulsion. 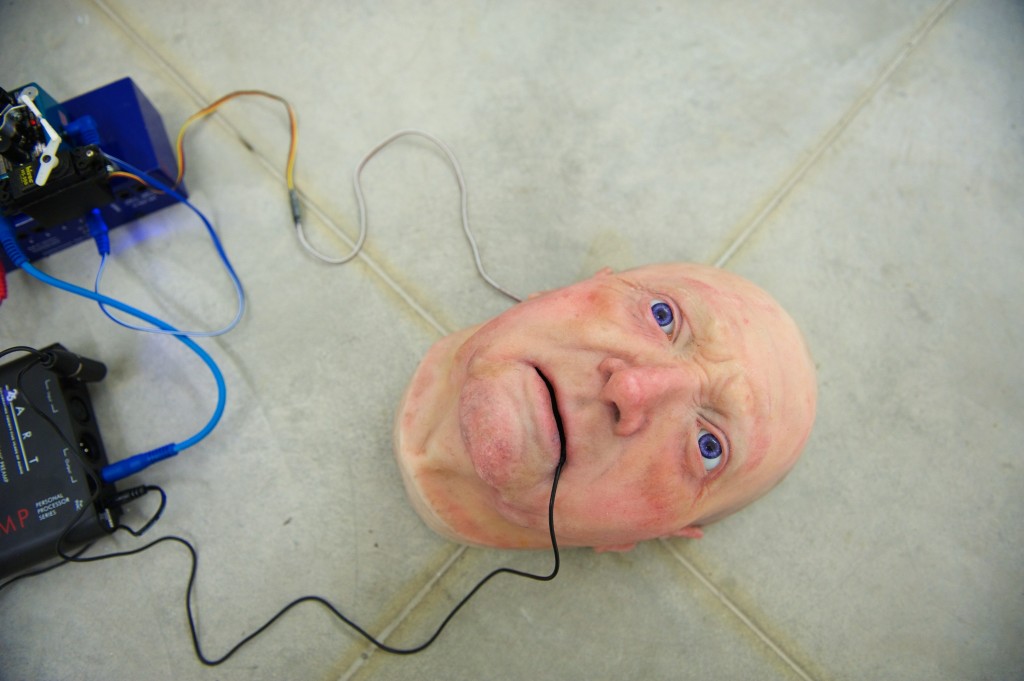 Nathaniel Mellors (b. 1974) is an artist based in Amsterdam and London. The application of language is a central theme in Mellors´ absurdist scripts, psychedelic theatre, film, video, performance, collage and sculpture. Mellors also plays bass guitar in the group Advanced Sportswear and is a co-founder of Junior Aspirin Records. In 2009 at the South London Gallery, he put on a one-night stage version of his film, The Time Surgeon. He was represented in the Tate Trienniel 2009, Altermodern, by a work Giantbum 2009, based on a story written by him about a party of medieval explorers who lose their way in the body of a giant. The work was also exhibited at the Stedelijk Museum, Amsterdam, and a variant of it at Centro Cultural Montehermoso in Vitoria-Gasteiz. In summer 2009, Mellors was commissioned by the BBC to make a short ‘work of modern art’ to introduce the final episode of the cultural history series 7 Ages of Britain Face, presented by David Dimbleby and directed by Jonty Claypole. Mellors studied at the Ruskin School, Oxford University (1996-99), the Royal College of Art, London (1999-2001), and the Rijksakademie van beeldende kunsten, Amsterdam (2007-09). He is represented by Matt´s Gallery, London; MONITOR, Rome & Galerie Diana Stigter, Amsterdam.