1: Songs is a solo performance presented as a concert, a Liederkreis, an existential exercise for a singing body. Performer Ibelisse Guardia Ferragutti surrenders her voice to the intense words of tragic female figures from the history of theatre, figures such as Antigone, Medea and Gretchen. The suffering of the fictional (anti-)heroines repeatedly enters her very being as she sings, shouts and speaks their words – she is fragile, raw, calculating and emotional.

But who is speaking here? And do the dramatic references from the past resonate in the here and now? The symbiosis of contemporary electronic music composed by Gary Shepherd and texts from the literary canon form the basis for a subtle but loud scream against the instability and calculable incalculability of our existence.

In 2010 Nicole Beutler received the prestigious vscd-Mimeprice for 1: Songs. The piece was also selected by the jury of the Flemish Theaterfestival as one of the best performances of the season 2009/2010 and was performed during the Dutch Theaterfestival in 2010.

NBprojects receives for the work of Nicole Beutler subsidy from the FPK in the Netherlands. 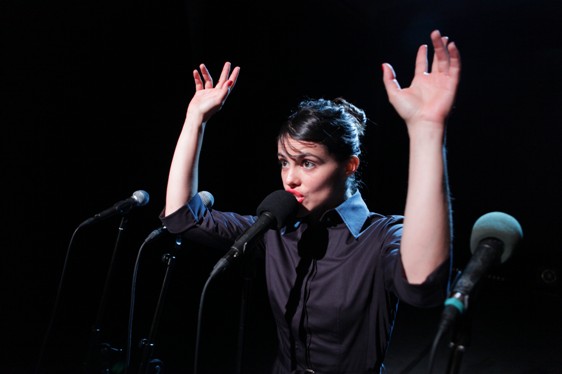 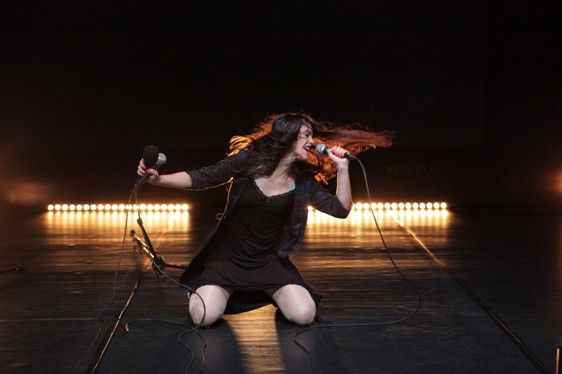 Nicole Beutler (b. 1969) is a German choreographer, curator and performer. She has been living and working in Amsterdam since 1993. She studied Fine Arts at Münster and München arts academies, German Literature at the University of Münster and Dance and Choreography at the SNDO at the Theatre School, Amsterdam. Her work is situated on the threshold of dance, performance and visual arts. With her diverse activities and critical eye, she wants to create space for exchange, reflection and encounters. Her performances are composed musically, and suffused with subtle humour. They are characterised by minimal stage sets and a focus on the performer as a human being. In all her work, she examines the function of dance in the context of performance and theatre. After five years producing works in the collective Lisa, she started her own organisation, NBprojects in 2009.