‘My childhood has a profound influence on what I create now,’ says Katarzyna Szweda. Her photographs are an extension of the artist’s relationship with the presented landscapes. A relationship so close it is almost corporeal. 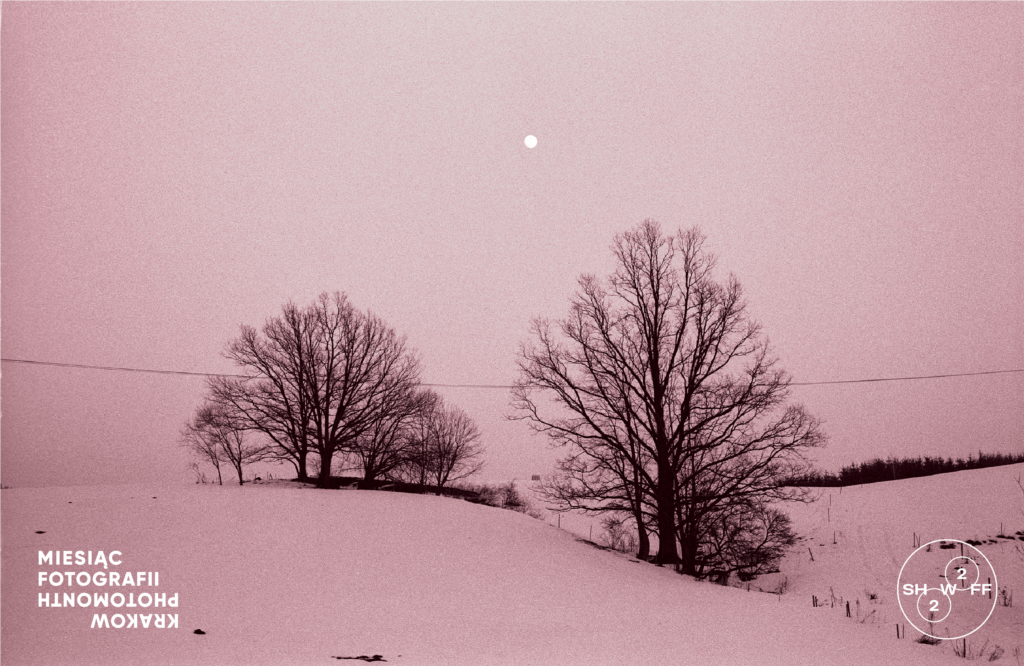 „There Is No One Nearby to Share With” | Katarzyna Szweda
Exhibition is a part of ShowOFF section of Krakow Photomonth 2022
May 27 – July 3
Cricoteka, 2-4 Nadwiślańska Street
Curated by: Magda Ujma
Tickets: 3/5

There is good reason for Katarzyna titling the exhibited cycle Zemla, which in Lemko means earth, as in soil. This, as the photographer understands it, is its most essential value. But it is not solely the ground that guides the walker’s feet, on which to step firmly. Zemla is a giver of life: the mother, the abode where you feel truly at home, sinking your roots into it like a plant.

The photographs were taken during hiking and biking trips through the Low Beskids (Beskid Niski) mountain range of southern Poland. The body slices into view. The artist sets out, gathers momentum, coasts at speed. And this feeling of air on her face and body—air smelling of mud, melting snow, pine needles, but also the mustiness of abandoned houses—registers in her work. Disrupting the landscape with her own silhouette also strongly affects the photographs, when amidst the repetitiveness of the gentle, blurred landscape, seen as if from inside looking out, lacking contour, sudden sharp lines appear: flashes of light, outlines of roads, branches and plant stems.

The author roams the valleys where, before the war, villages once bustled with life. Her photographs convey a sense of loss. How to give shape to the void? It originates with a memory that is impossible to bear. Memory is invasive, it resurfaces, haunts the grandchildren of those affected by traumatic events with its afterimages and echoes. Because how to depict the enormity of violence? Displacement? Uprooting? All soaked into the ground, which was and remains the fundamental value for the people who have lived there for centuries. For the Lemkos. Katarzyna alludes to the subject of a lost motherland with great sensitivity. Through the work, the artist traces the connection between the villages, of which no trace was left, and the former fields, meadows, pastures, and groves of yore. Through them, she seeks to visualise the people who once lived on this land. Her camera seems powerless, incapable of capturing anything other than empty, barren, accidental frames. There is nothing of the picturesque in these photos; they are bereft of nostalgia. A hovering non-memory, resisting sharp visualisation. This inability to remember hampers the ability to notice specific features. The views captured by the photographer often resemble incidental, ruined snapshots, or those taken while tailing someone, hastily shot from behind cover. They seem more felt than seen. They induce a state of being haunted by memories not-one’s-own, rather than showing the present-day hills and valleys of the Low Beskids, overgrown with blackberry, juniper, and nettle.

The arrangement of the photographs, a weave of image and poetry, is intended to evoke the horizon line, while at the same time underscoring the inability to align the work into a tidily scenic landscape. ‘There is no one nearby to share with’—a standard text relayed by a messaging app encapsulates the emptiness that, natural beauty notwithstanding, emanates from the valleys of the Low Beskids.

The photographs are accompanied by a soundtrack of excerpts from the recollections of Michał Kuszwara, an inhabitant of the Low Beskids, and poems by Katarzyna Szweda.