‘Rollercoaster: Collectors of Sensations’ is a programme of presentations of Polish dance carried out by the CRICOTEKA Centre for the Documentation of the Art of Tadeusz Kantor as part of the ‘Scena dla Tańca 2018’ [Stage for Dance 2018] project of the Institute of Music and Dance. The project’s curators, Paweł Łyskawa and Eryk Makohon, draw on Bauman’s concept of postmodern man, based on four personality models (the tourist, the stroller, the vagabond and the player). 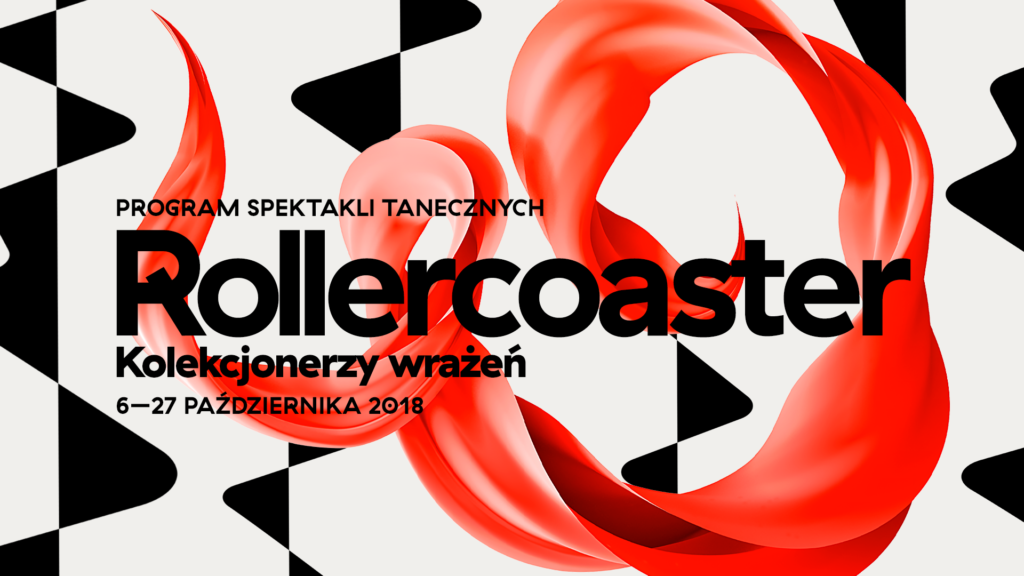 As the curators we suggest that you ‘fly… into some other space… to look at the world from a different angle, with different logic, different methods of knowing and proving’ (Italo Calvino, Six Memos for the Next Millennium, transl. by Geoffrey Brock). We propose an escape from reality via four routes, which are bound to intersect and merge. ‘Rollercoaster’ invites the audience into the realm of new sensations, beautiful and uncomfortable, strong, sometimes extreme, both intellectual and physical. It is an invitation to abandon control, to participate. Our ‘Rollercoaster’ is a ‘sensitive experience’ rather than ‘logical ecstasy,’ as the French writer and philosopher Georges Bataille (the inspiration for Sławek Krawczyński and Ania Godowska’s show Bataille i świt nowych dni [Bataille and the Dawn of New Days]) would say. [Paweł Łyskawa]

The seven presentations of ‘Rollercoaster’ are connected by two axes of curatorial selection. The contrasting styles and forms build a collector’s kaleidoscope of sensations – the presentations vary between performance (Witajcie/Welcome) and actions concentrated around a purely choreographic structure (Stany skupienia [States of Matter], Glamour), between a monodrama combining choreographic and literary content (MELT) or shows similar to the theatre of dance (Bataille i świt nowych dni, Singulare tantum) and forms drawing on the ideas of scientific experimentation. In accordance with Bauman’s anthropology of human types, the viewer is offered an opportunity to go for a stroll or begin an ‘intergeneric wandering’; he can also develop his own strategies and games of reception or simply take a comfortable seat as a tourist.

The selected pieces share another axis: that of the postmodern vision of the world, whose philosophies are realized in the works of the choreographers through movement and the body. In the shows it is reflected in the recurring motifs of transgression, transcendence and liminality of actions, the postmodern idea of verification and denial or even destruction, the need to tear off the masks and assume new calculated positions (Ciesielski, Przybyłowicz, Krawczyński, Godowska, Makohon, Ganjalyan). The artists draw directly on the ideas of the philosophers Bataille (Krawczyk, Godowska) and Goffman (Makohon), forcing us and themselves to redefine convenient stances, be it in relation to what is strange (Lubos) or in desperate attempts to replace ‘I’ with a ‘we’ (Pawłowska, Łyskawa, Makohon). [ErykMakohon]

Some of the productions on offer (Witajcie/Welcome, Singulare tantum, Stany skupienia, Idylluzja) do away with the traditional division into actors and spectators. The performer involves the audience in his actions, shaking it out of the comfort zone of cold detachment, forcing it to participate and feel with him. [P.Ł.]

‘Is there a definition of a perfect roller coaster?‘

‘Perhaps a good enough one. The most important thing is to find a balance between feeling euphoria, losing control and the sense of danger. What also matters is the social interactions, or who is sitting next to you and who’s going to watch you from below. If you see the roller coaster as a performance, the track is the stage and you are the artist, then you can enjoy it the most, experience the greatest excitement. [Excerpt from an interview with Brendan Walker, a roller coaster engineer and designer (Aleksandra Postoła, ‘W górę i pędem na dół. Jazda z dreszczykiem’, Gazeta Wyborcza, 29 August 2015)]