“Rollercoaster. Experience Collectors” is a program of contemporary dance presentations. The performances, selected by the curators Paweł Łyskawa and Eryk Makohon, different in terms of aesthetics and form, consistently fit into the theme of the programme of subsequent editions; this year under the motto “Young creators of impressions”.

The performance is built around the figure of the goddess MOKOSZ – as a Slavic archetype of female divinity, vitality and fertility. The motif of the “mother of the earth” and the interpenetration of anima/animus elements, placed in a broad social and cultural context, will serve the search for the form in which contemporary femininity and feminine energy is materialized.

The first stage of romantic love has many transgressions in its nature, and at the same time it has to happen in order to die, evolve and transform into something more mature and intimate. In the spectacle, the artists look at the love that comes after the romantic love, raised on a pedestal and glorified in art. They are looking for the beginning of the end and the end of its beginning. The closeness in the distance. They look at each other as organism to organism. What would my lungs say about you? How does my liver see you? What do your intestines claim?

“One hundred falls” and much more.
Civilizations fall, cultures fall, authority figures fall, we fall morally, we fall physically. It seems that all of human history is made up of sudden falls like upheavals and wars, but also slow and ignored ones like climate catastrophe. It is difficult to determine when a fall is still a tragedy and when it is a new opportunity. The heroine loses herself in a dance on a fallen civilization, a fallen culture, on fallen authorities, on our moral decline, and finds acceptance in her failing body. In her inert flight she finds her freedom and space to realize her identity. 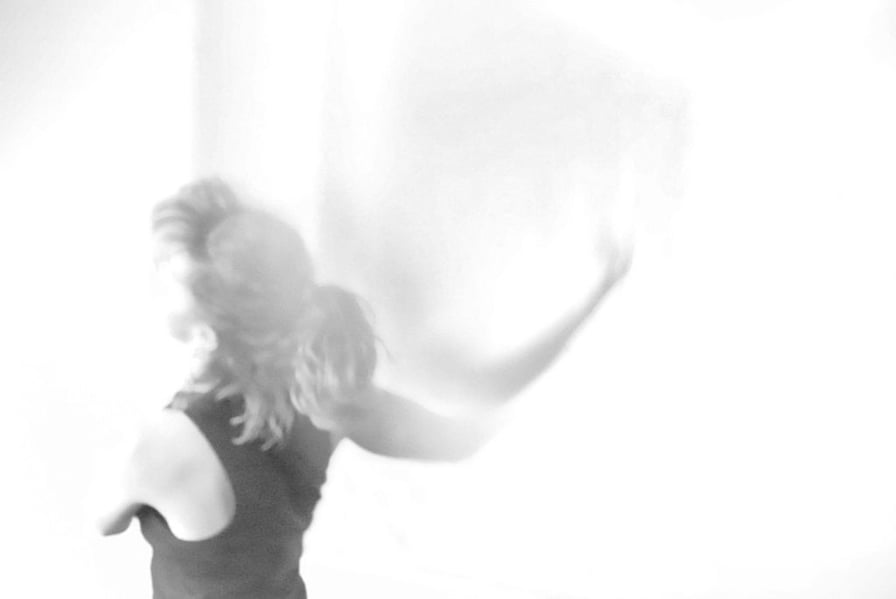 The performance is inspired by Władysław Strzemiński’s idea of empirical seeing, or “seeing with the whole body”. The artist made the growth of visual awareness dependent on the development of the human mind. He pointed out that the reception of visual experience is an active process of awareness – the embodiment of thoughts. He did not recognize the act of seeing as a passive, biologically conditioned session of processing images by the human eye. The challenge of the performance is to find a kind of communication with the viewer that will create the illusion of a clash between the present reality and the world frozen in film. The world of the show will make the viewer start living simultaneously in two dimensions, the “real” and the “digital”.

“Liberi” is an objective look at the issue of social enslavement of women. It is a reflection on the freedom of a contemporary woman, European and Polish. This reflection on freedom is all the more painful the more freedom we seem to have today. Seemingly – because it crashes against the wall of such a fundamental right as the ability to decide about one’s fertility.
“Liberi” is Latin for children, and from the Italian the adjective “free”. For many modern women today, these are mutually exclusive translations.

The performance is a result of personal experiences and emotions, an embodiment of the path followed by the artist. The starting point for the dancer is the encounter with the subject of stone, not obvious in the first moment but so tangible and real on second reflection. Its matter will be a “time capsule” for the artist, and the body – due to its properties – will visualize that time. The stone and the human body form a tandem traveling a road full of frictions and incompatibilities. The experienced stone opens and evokes. In the dialogue between the body and the memory of stones, one can find balance, choose a direction leading through silence and harmony. Or maybe the solution is to balance the chaos, to embrace the noise?

PREMIERE “Humanimal”, November 27 and 28, 18:30-19:30
The inspiration of the show goes back to the now forgotten public exhibitions, the so-called “human zoo”, where representatives of indigenous peoples living in the colonies were placed. The living exhibits for the visitors were just nameless faces, placed in the zoo for entertainment, having previously been brutally displaced from their native land. The dehumanization underlying human zoos is a problem still present in world history – by infrahumanizing the homeless, drug addicts, and beggars, we subtly limit the humanity of others than ourselves.

The performances “Goździk w pustej muszli”, “One Hundred Falls” and “Humanimal” were created as part of the residency project of Krakow Dance Theatre “Rollercoaster. Young creators of impressions”, realized with the financial support of Malopolska Region.
The performance “White Rabbit” was created within the framework of the OFF POLAND Program.
The OFF POLAND Program is realized from the funds of the Ministry of Culture, National Heritage and Sport.
Liberi” was financed from the funds of the Municipality of Krakow, within the framework of the scholarship granted to Katarzyna Kostrzewa.
The sponsor of the “Humanimal” performance is the Polygen company.