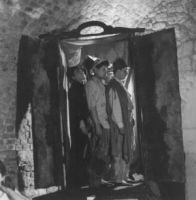 THE INFORMEL THEATRE 1961
“The premiere of “In a Little Manor House” in Cricot 2 Theatre
(the text by S. I. Witkiewicz)

“The first full manifestation of the Informel Theatre.
The theatrical territory was embraced by the conception which pervaded

all of my earlier automatic actions resulting from

the recognition of chance, of the process of destruction, of spontaneous movement

and of substance.
It was a hot period of a spiritual revolution which shifted the actor’s commitment

from the “visible” plane onto the internal  one.

There are many false opinions surrounding this idea. It is superficially associated with the Surrealist Movement (in the theatre: with the name of A. Artaud).
On the other hand, some of its most primitive interpretations lead to symptoms of vague and anti-intellectual expressionism.
That is why it is necessary to specify clearly the essential  m e a n i n g  of the informel art in general.

It neither explores the subconscious nor shows individual obsessions.

What is meant is something much more important! And NEW!
This is the discovery of a new, unknown aspect
of reality, of its basic condition: MATTER.
Matter, not ruled by the laws of construction,
forever changeable and liquid,
escaping every rational measure,
making all the efforts to give it a solid form
look funny
helpless and futile,
constantly destroying any kind of form,
being more of a manifestation
penetrable only by means of
destructive forces,
caprice and the  r i s k  o f  c h a n c e
thanks to rapidity and violence of  a c t i o n.

Moulding all this into some kind of method in order to attempt to use it in the theatre would be naive pedantry and would involve camouflaging the very process
of artistic creation by means of pseudo-scientific “lab experiments.” This theatre and this kind of art had to come into existence unprovoked, as an act of spontaneous creation. (…)”