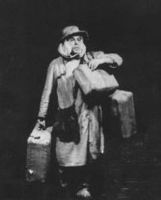 Man with Suitcases (Edgar Wałpor) “The Water-Hen”, 1967; the costume is partly preserved; owned by Cricoteka

“I came across an unusual model: the Wandering People. Wandering endlessly, without purpose or home, shaped by their passions and their eagerness to “w r a p” their bodies in coats and blankets, immersed in the complicated “a n a t o m y  o f  c l o t h i n g“, in the secrets of  p a r c e l s, p a c k e t s, b a g s, straps and strings, protecting their bodies from the sun, from cold and rain…
Those “models” (a long time ago, when observing tramps in Paris and Cracow, I named them “people incomprehensible to the rest”) – not because of their appearance (“pittoresque”) but because of their separate human philosophy – induced a whole series of my characters, pictures and happenings: “Human emballages”, “Wanderers and their baggage”, “A troupe of travelling artists”, “The idea of art as a journey” (1963).” 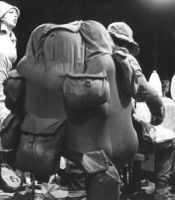