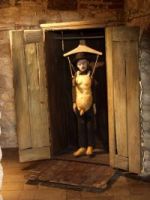 The Wardrobe – Interior of Imagination “In a Little Manor House”, 1961, owned by Cricoteka

“I have discovered a new theatrical  P L A C E… the  W A R D R O B E. (Children discovered it much earlier).

Dummy people (1960)
The time has come for the theatre. The actor’s living organism, with its heavy load of psychology, becomes replaced by a DUMMY. Like clothes on a coat hanger. In a wardrobe. The actor’s performance forces its way through the resistant and strange substance to find – deep inside, as if at the bottom of hell – the human image.”